“Like one, that on a lonesome road
Doth walk in fear and dread,
And having once turned round walks on,
And turns no more his head;
Because he knows, a frightful fiend
Doth close behind him tread.”
― Samuel Taylor Coleridge, The Rime of the Ancient Mariner
Mystery abounds in Blackmoor.
A keening wind howls and sweeps its volcanic plains, its steppes, and its stunted pine and fir. How anyone survives here is a wonder, but the little-known, and lesser-understood, nation of Blackmoor surely does, or did, once.
Once, the Ur-Flan held dominion here, gone now having left and abundance of mounds and barrows, and standing stones and circles behind, with only the cabal of Northern Adepts, and the Witch Covens to tend them. The Rovers commanded here once the Ur-Flan faded away, the thunder of their hooves challenged by no man or beast, save the Uirtag, their distant and reclusive kin of the Burneal. Until the Relentless Horde of the west swept them from its desolation.
Then came the Aerdi, who clamed it once they struck ground and found it rich in copper. The Aerdi did not remain, but some of their sons did, as did a few Suel, and those very few Uirtag and Rovers who were mired there when the Aerdi planted their flag.
Those who remain cannot ever truly claim dominion. The land is too wild, its moors too dangerous. Few who have struck out into the Burneal Forest, or into the Cold Wastes beyond the Dragon Hills, have ever returned; and none whom have ever ventured north, seeking the fabled City of the Gods or the enigmatic Egg of Coot, whomever, or whatever, that might be.
Blackmoor was a doomed venture, the Celestial Houses of Aerdy predicted. And it was, just not for the reasons they presumed. A few cited the cold, others its isolation; a few of the learned remarked on how often liches have risen from the four, odoriferous swamps surrounding it, warning cryptically that the mightiest of the Ur-Flan had only faded from the Flanaess, and would surely return. None could have predicted that the Egg of Coot would Take interest in the city of Blackmoor, but he did. If he did. Whyever his reason, he descended upon its walls, and scattered its stone to the marshes as though it were merely clay, mayhap as a warning to any and all who might seek out his existence to never do so again.
Mordenkainen had, and will not speak of what he discovered in that desolate north. The Archmage Marinian of Willip had, and he disappeared, and no scrying can divine his fate. 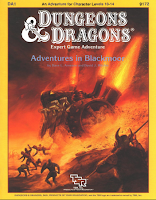 Greyhawk Adventures Hardback
DA1 Adventures in Blackmoor
What information there is about Dave Arneson’s Blackmoor is not what I would consider canon. It was a setting unto itself, originally. Neither are the DA series of modules, as they are part of Mystara; but you can glean what you will from them if you choose, and even use them if your heart desires.
As to Greyhawk sources, the most pertinent information concerning Blackmoor and the Burning Cliffs, and that can be found in:
The Greyhawk Folio, The Greyhawk setting boxed set, Greyhawk Adventures, Greyhawk Wars, From the Ashes Boxed Set, Living Greyhawk Gazetteer (pgs 134 & 154 concerning the Zeai), Dragon magazine #52,55,56,57
Adventures in this country include: 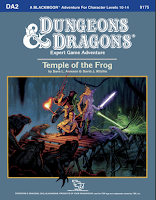 DA1 Adventures in Blackmoor
DA2 The Temple of the Frog
DA3 City if the Gods
DA4 Duchy of Ten
Ex Keraptis Cum Amore, Dungeon #77, Burning Cliffs
Raiders of the Black Ice, Dungeon #115, Blackmoor
The Clockwork Fortress, Dungeon #126, Blackmoor
The Dungeons of Castle Blackmoor (Zeitgeist Games)
Arctic adventures in Blackmoor, the Cold Marshes, the Taival Tundra; (and the outer doors of and ancient dwarven clanhold)
Explore Blackmoor Bay, the Archbarony of Blackmoor
Adventures concerning the Egg of Coot.
Explore the Land of Black Ice, the Dragon Hills, the Cold Wastes, and the Burning Cliffs.
Sea adventures upon the Icy Seas, White Fang Bay, and Big Seal Bay.
White Dragons, Ice Trolls, Winter Wolves.
Intrigue within the Empire of Iuz and the Duchy of Tenh.
Tiger Nomads, Wolf Nomads, and the Rovers of the Barrens.
The Black Shaman and his horde from the Frost Citadel are a constant threat competing for many of the same resources.
Caravan slave raiders & dragon infested wilderness; The Garbage Pits of Despair (Different Worlds #42,43)
Adventures in nearby areas include:
WGS1 Five Shall Be One, Bandit Kingdoms
WGS2 Howl From the North, Hold of Stonefist
WGR5 Iuz the Evil
The Dancing Hut of Baba Yaga
Fright at Tristor, Theocracy of the Pale
A Slight Diversion, OJ#9, Redspan, Bandit Kingdoms
Out of the Ashes, Dungeon #17, Bandit Kingdoms
Ghost Dance, Dungeon #32, Rovers of the Barrens
Armistice, Dungeon #84, Griff Mountains
The Sharm’s Dark Song, Dungeon #87
Glacier Seas, Dungeon #87
Beyond the Light of Reason, Dungeon #96, Tenh
Ill Made Graves, Dungeon #133, Jotsplat & the Icy Sea
C11 When Comes the Witching Hour, by Carlos Lising, casl Entertainment, 2019, Jotsplat & the Icy Sea
C13 From His Cold, Dead Hands, by Carlos Lising, casl Entertainment, 2019, Jotsplat & the Icy Sea
C14 The Sanguine Labyrinth, by Carlos Lising, casl Entertainment, 2019, Rovers of the Barrens
WGH2 Into the Howling Hills, by Bill Silvey, The Delvers Dungeon, 2007, Iuz
WGH3 Tombs of the Howling Hills, by Bill Silvey, The Delvers Dungeon, 2007, Iuz
WGH4 Lord of the Howling Hills, by Bill Silvey, The Delvers Dungeon, 2007, Iuz
S7 The Howling Hills, by Charley Phipps, Iuz
Tomb of Zhang the Horrific, by William Dvorak, Rovers of the Barrens.
Although later retconned into the Yeomanry, B1 Into the Unknown (in the monochrome edition) was originally suggested as located in The Duchy of Tenh. That would make north Tenh an ideal location for B1 Keep on the Borderlands, as well.
Forest Adventures in the Burneal Forest. The Uirtag.
Adventures in the Taival Tundra; (and the outer doors of and ancient dwarven clanhold)
Forest adventures in the Burneal Forest, Bears, winter wolves and sable firs.
Mountain adventures (and possibly Underdark adventures) in the Griff mountains (alternate placement of G1-3). Dragons. Remorhaz. Yeti.
Taking the fight to Iuz.
Ruins of the Ur-Flan from the time of Keraptis.
Infiltrating the Gibbering Gate to free prisoners. The Gibbering Gate is a prison/insane asylum in the Barrens, run by Jumper, one of Iuz’s Greater Boneheart. Information about it can be found in WGR5 Iuz the Evil.
Hunt down the mythic white Auroch.
Forest adventures in the Forlorn and Fellreev Forests. The Forlorn is just east of the Barren Wastes, and is chockfull of monsters and ancient secrets. To the Southeast of the Barrens is the Bluff Hills, home of the Shadow Caverns and a number of Ur-Flan ruin.
In a land as remote and open as Blackmoor and the Land of Black Ice, there would certainly be, as yet unknown, seekers of power and solitude waiting to be discovered by intrepid adventurers. Who knows what mysterious cabals of mages or covens of witches an enterprising DM might create?

Inspiration for campaigns in this harsh land can be found in: Beowulf, Vikings (TV), The 13th Warrior (Movie). Also in the voyages of the explorers of the Hudson Bay Company: David Thompson and Samuel Hearne, the journals of Roald Amundsen, and the writings of Farley Mowat.
Further inspiration can be had from the blogs: “Hall of the Mountain King,” by Jason Zavoda (Key label “blackmoor”; and “Against the Wicked City,” by Joseph Mandola (Key label “Clockpunk”). 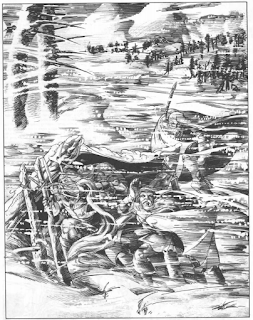 This Primer has been expanded from the original “Blackmoor” postcard found on Canonfire’s “Touring the Flanaess” index, written by Tim “Enoch Pratt” O'Donnell and Dan "Aldarron" Boggs, and some passages from that scholarly work reside with this piece.