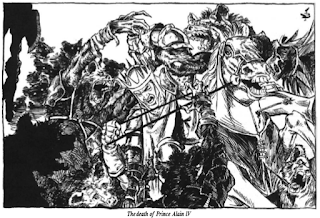 Infighting soon broke out between several of the nonhuman tribes, and the sides remained stalemated until 586 CY, when Alain IV, Archbaron Lexnol's son and heir, launched a raid into the fallen realm that was composed in large part of expatriates of the march, it was a doomed mission. The unusually organized nonhumans laid a trap for the force in the hills north of Spinecastle. Horrified survivors who escaped back to Ratikhill reported that the trapped raiders were dragged from their horses, torn apart, and eaten alive before their eyes. Raids into the archbarony from Bone March have resumed. [LGG – 37]
Hundgred bewailed Alain’s passing. Why? he screamed! Why indeed had that dirty old hag, Syrul, lured his friend to such a fate.
Upon hearing of his son's demise, old Baron Lexnol collapsed. He awakened the next morning with a shock of white hair and a palsy that confined him to bed. Lady Evaleigh, now widowed, assumed the throne and has guided Ratik through the trouble that has befallen it. Raids from Bone March have become progressively stronger and more organized the last few years. [LGG – 91]
And why, had fickle fate decreed that his father’s friend should be laid so low, and that a maiden should take up the reins of Ratik?
589 CY
Ruler: His Most Warlike Majesty, King Hundgred Rälffson of the Fruztii (CN male human Bbn13)
Population: 144,500—Human 96% (S), Dwarf 2% (hill 50%, mountain 50%), Halfling 1%, Other 1%
Major towns: Djekul (pop. 3,100), Krakenheim (pop. 4,500) [LGG - 44]
Time marches on.
Hundgred, now 40, has long since understood the wisdom of his father. He has renewed his faith in the Northern Alliance…for now. Ratik has proven its allegiance and held true, despite its continued desire to foster ever closer relations with Knurl. But that was to be expected, what with Lexnol’s line having failed, and its nation’s course steered by a child of that southern city.
The Fruztii are strongly allied to the Archbarony of Ratik in the south. […] Changes are already apparent in the royal court at Krakenheim, with more formal (or "civilized") trappings in the organization of the government and the military. These changes do not meet with the approval of many of the older jarls, but they remain loyal to Hundgred out of respect for his noble father. [LGG – 44]
But Hundgred has not seen fit to rid Friztii of the whispers from Shar, either.
Ambassadors from the Scarlet Brotherhood were spied in Djekul. [LGG – 91]
Nobles from Ratik have great influence at court but are not always trusted. Scarlet Brotherhood agents are well received but bring strange news and promises. Merchants from the Lordship of the Isles have a growing presence, offering unusually generous trade deals that make some jarls suspicious. Hundgred's court is growing isolated from other northern barbarian nations. [LGG – 44]
One wonders: How long can Hundgred withstand the sweet promises of his distant “kin”?
Or has he already been seduced by their whispers?
For many years, Ratik and the Fruztii nation have lived in relative peace under the Northern Alliance, an agreement forged by Baron Lexnol. All looked well; the monarch of the Fruztii, King Hundgred Rallfson, even married a Ratikkan noblewoman. But now, as Ratik teeters on the brink of political collapse, skirmishes have erupted between the northernmost nobles and the Fruztii clans. The [Ratikkan] crown has yet to take action, either politically or militarily, once again leaving its nobles to stand alone. This time House Ulthek and the Order of the Hart guard the border. [LGJ#3 - 29]
One must always give credit where credit is due. This piece is made possible primarily by the Imaginings of Gary Gygax and his Old Guard, Lenard Lakofka among them, and the new old guards, Carl Sargant, James Ward, Roger E. Moore. And Erik Mona, Gary Holian, Sean Reynolds, Frederick Weining. The list is interminable.
Special thanks to Jason Zavoda for his compiled index, “Greyhawkania,” an invaluable research tool.
The Art:
All art is wholly owned by the artists.
Assassin-s-Creed-Valhalla-Eivor by innervalue
Grief-Of-War by cha4os
Assassins-Creed-Valhalla-Eivor-n-Jomsviking by agussw
Dwarf by armandeo64
Viking-Funeral by xochicalco
Norseman-Painting by teironius
Ranar by akreon
Viking-Funeral by artesora
The Death of Alain IV, by Joel Biske, from Living Greyhawk Gazetteeer, 2000
Red-Hood by benedickbana
Lands-Beyond-Norway-Assassin-s-Creed-Valhalla by gamephotographer
Sources:
1015 World of Greyhawk Boxed Set, 1983
2023 Greyhawk Adventures Hardback, 1988
1064 From the Ashes Boxed Set, 1992
9577 The Adventure Begins, 1998
9578 Player’s Guide to Greyhawk, 1998
11742 Gazetteer, 2000
11743 Living Greyhawk Gazetteer, 2000
Living Greyhawk Journal, #1
Dragon Magazine 55,56,57
Greyhawkania, Jason Zavoda
The map of Anna B. Meyer
at June 25, 2021 No comments:

The Road Not Taken

Two roads diverged in a yellow wood,
And sorry I could not travel both
And be one traveler, long I stood
And looked down one as far as I could
To where it bent in the undergrowth;
Then took the other, as just as fair,
And having perhaps the better claim,
Because it was grassy and wanted wear;
Though as for that the passing there
Had worn them really about the same,
And both that morning equally lay
In leaves no step had trodden black.
Oh, I kept the first for another day!
Yet knowing how way leads on to way,
I doubted if I should ever come back.
I shall be telling this with a sigh
Somewhere ages and ages hence:
Two roads diverged in a wood, and I—
I took the one less traveled by,
And that has made all the difference.
By Robert Frost
Published August 1915, in Atlantic Monthly
and in Mountain Interval, in 1916
The Art:
Featured art is wholly owned by the artists.
Fingers-of-Light by sigfodr
at June 23, 2021 1 comment:

Email ThisBlogThis!Share to TwitterShare to FacebookShare to Pinterest
Labels: Poetry

History of the South, Part 1: Foundations