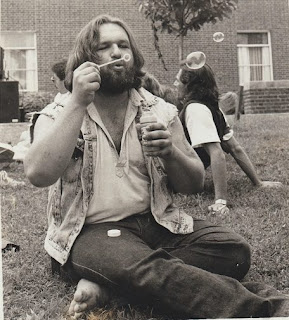 Some time ago, I asked a choice few members of the Greyhawk community which personalities they would like me to address in this ongoing biography series. I’ve been lax in getting to what was suggested. Too lax, it would seem. I’d focused mainly on those in the Northeast—those not suggested by any of those asked, I might add—those I was somewhat familiar with, thinking I had all the time in the world.
It turns out I did not. Jason Zavoda had suggested I do Nystul. I thought that was a great idea. I could do each of the Circle of Eight in turn; indeed, I could do all the members of the Citadel, as well. I compiled notes, and began with Leomund, and posted it a few months before Len Lakofka’s passing. Len took what he thought of my effort to his grave, so I will never know if he was pleased, or flattered, or annoyed. Knowing Len a little, I suggest he might have been all three. I followed that up with a grand history of the Eight and then one on Otto. Progress! I expected to continue unabated, but I became distracted. I do that. There are times I wonder if I am not addled. I’d collected many notes on Nystul, nothing polished, more bullet points than notes, really. And then Jason passed, too, before I thought to complete this piece.
I may be late, but it’s done, and it’s dedicated you, Jason. I’m saddened that you’ll never read it. I do wonder what you’d have thought of it.
A word to the wise. Don’t delay. You never know what’s around the bend.
“Ah, Nothing is too late, till the tired heart shall cease to palpitate.”
― Henry Wadsworth Longfellow
“O dark dark dark. We all go into the dark,
The vacant interstellar places, the vacant into the vacant […]”
― T.S. Eliot
One must always give credit where credit is due. This piece is made possible primarily by the Imaginings of Gary Gygax and his Old Guard, Lenard Lakofka among them, and the new old guards, Carl Sargant, James Ward, Roger E. Moore. And Erik Mona, Gary Holian, Sean Reynolds, Frederick Weining. The list is interminable.
Special thanks to Jason Zavoda for his compiled index, “Greyhawkania,” an invaluable research tool.
The Art:
Nystul portrait, by Sam Wood, from Living Greyhawk Journal #0, 2000
Shambala by artisticadventures
Jack-Foudling by christianbravery
Radigast-City by lukc
WG5 Mordenkainen's Fantastic Adventure cover detail, by Clyde Caldwell, 1984
Why-you-so-ma-bruhh by therockycrowe
Inn-Of-Heroes by atomiiii
Arthur-Prince by commissioner-jordan
Vec-machina by stephen-0akley
The Circle of Eight, by Ken Frank, from WGA4 Vecna Lives!,  1990
DEGENESIS-SIXMOREVODKA by esbenlash
Defensive Wall, by Ken Frank, from Wars Boxed Set, Adventurer's Book, 1991
Rary's Berayal, by Ken Frank, from WGR3 Rary the Traitor, 1992
Nystul detail, by Sam Wood, from Living Greyhawk Journal #6,  2001
Dwarf-head by mikeazevedo
The Circle of Eight, by Sam Wood, from Living Greyhawk Journal #6,  2001
Spell-Components by demonui
Jason Zavoda, photographer unknown
Sources:
1015 World of Greyhawk Boxed Set, 1983
2023 Greyhawk Adventures Hardback, 1988
1064 From the Ashes Boxed Set, 1992
9309 WGA4 Vecna Lives, 1990
9360 WGR2 Treasures of Greyhawk, 1992
9576 Return of the Eight, 1998
9577 The Adventure Begins, 1998
9578 Player’s Guide to Greyhawk, 1998
11743 Living Greyhawk Gazeteer, 2000
Dragon Magazine 82,270,273
LGJ et. al.
Greyhawkania, Jason Zavoda
at January 22, 2022 2 comments: