“Sometimes the only thing you could do for people was to be there.”
― Terry Pratchett, Soul Music
You have to wonder if Tenser missed his calling. Tenser, it seems, likes to roll up his sleeves and wade into battle, on occasion. That’s very un-magi behaviour, given that those of his profession prefer to stand back and let the brawn take care of the physical stuff. For obvious reason. Sans armour, they are somewhat vulnerable to sharp and pointy things. Keeping back is prudent, considering. Tenser, one the other hand, when considering his spell creations, could be the exception that proves the rule. His spells are decidedly martial-esque.
This is not to say that Tenser is stupid. Or particularly martial. Not at all. While he did create a few spells that were meant to transform himself into a formidable fighting machine (Tenser’s Transformation and Tenser’s Staff of Smiting, come to mind), the lion share of his creations were supportive in nature, their purpose focussed on augmenting his warlike companions’ physical abilities, prowess, and martial skills. Clever. The quicker the tanks dropped those who threatened his own personal wellbeing the better, he obviously surmised. And the longer they stayed up in a fight the more likely they were to survive the melee. Him too, by association. Thus, his spells improved their night vision, steadied their aim, waxed their strength; and in some cases, protected them from harmful magics that might take them out of the fight. He did create other spells, though, that might be considered useful to dungeon delvers: his eponymous Floating Disk, for instance. Loot is useless if you can’t lug it out from the depths, left lying about for others to discover and abscond with before you could return to collect what you could not carry.  But mostly, though, his spells augment the prowess of his companions. You’d think that Tenser might have spent an inordinate amount of time in the company of rather rash fighters, those courageous types who blundered in against all opponents with abandon, whatever their size and however formidability they might be…
“Most of you are familiar with the name Robilar, and perhaps a few have knowledge of his brother, Terik. It was in this company, and with Merlynd as well, that I first ventured to the Isle of the Ape...” [WG6 – 6]
That sort of reckless abandon could promote a problem for Tenser’s lesser resilience and physical formidability, to say nothing of his continued wellbeing. Tenser reckoned that Robilar and Terik might need a little boost from time to time, if that would keep him alive and kicking, so he did his damnedest to do just that.
There was a problem, albeit a small one: If Robilar and Terik had a habit of charging into those clouds of gases and fireball blasts Tenser might cast in combat, without heed of the warnings he might bellow at them that it was unwise to so so, then he had best focus on transforming them into veritable maelstroms of whirling steel, instead.
So he did.
Let’s see how he did, then, shall we?
Although individual wizards of the Circle have developed their own spells, which are predominantly of one type (e.g. Tenser and Drawmij have their own spells which are mostly of the alteration [transmutation] school), all of them are considered as general (non-specialist) wizards. [COG:FFF – 21]
Level One
Tenser’s Eye of the Tiger
Tenser's Floating Disc
Tenser’s Steady Aim
Level Two
Tenser’s Brawl
Tenser’s Hunting Hawk 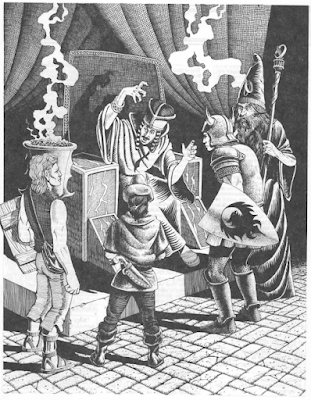 Flame: The blade ignites like a torch, casting light in a 30-foot radius. The flame will ignite any combustibles which the blade contacts. The blade gains no magical bonus, but will inflict an additional point of damage in melee. The blade does three additional points of damage against cold-based creatures, so a flaming dagger will inflict 1d4 + 3 damage to a yeti.
Frost: The blade glows with a cold blue aura that sheds light in a 10-foot radius. The blade has no magical bonus, but will do one extra point of damage when it hits. The frost blade will do three extra points of damage against a fire-based creature, such as a salamander or fire grue. The blade can also freeze up to one cubic foot of water per round when the blade is in contact with water.

The spell will have no effect on a weapon that already has a flame or frost capability. The material component for the spell is phosphorous to produce a flame blade or quartz crystal to create a frost blade.
[GA – 70]
Tenser’s Giant Strength (Alteration)
Level: 4
Components: V, S, M
Range: Touch
Casting Time: 1 turn
Duration: 3 turns/level
Saving Throw: None
Area of Effect: Person touched
Explanation/Description: This improvement of the strength spell empowers the recipient with superhuman physical strength. The strength gained depends on the experience level of the caster, as shown below.