History of the South, Part 14: A Presumption of War

“For the listener, who listens in the snow,
And, nothing himself, beholds
Nothing that is not there and the nothing that is.”
― Wallace Stevens, "The Snow Man"
If Soull is soul of Schnai, Knudje is its spirit. Nestled in the wooded foothills of the Corusks, its much-celebrated heroes guard its approach. But to what? From what? Nothing, they say. Mountains, they say. They defend Schnai and Soull from what may descend, they say. From orcs and ogres and trolls, from wolves and dragons and come what may.
That may be so, but the trained eye will note that their eyes sweep south far more than north. This raises the questions: What need they walls so far north that face south? What are they watching for? And what do they truly guard?
Indeed, a great many guard the way so far from the often trod path. 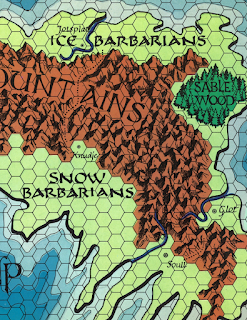