Thoughts on I6 Ravenloft

“I am the ancient. My beginnings are lost in the darkness of the past. I am not dead. Nor am I alive. I am undead, forever.”
—Count Strahd von Zarovich [I6 Ravenloft – 2]
Outside the Inn, a fog lies over the town this evening, draping everything in its clammy grasp. The damp cobbled street shines as the light of street lanterns dances across the slick stones. The cold fog chills the bones and shivers the soul of anyone outside.
Yet inside these tavern walls the food is hearty and the ale is warm and frothy. A fire blazes in the hearth and the tavern is alive with the tumbling voices of country folk.
Suddenly, a hush falls over the tavern. Even the flagons of ale seem to silence themselves. The tavern door swings open. Framed by the lamp-lit fog, a form strides into the room. His heavy, booted footfalls and the jingle of his coins shatter the silence. His brightly colored clothes are draped in loose folds about him and his hat hangs askew, hiding his eyes in shadows. Without hesitation, he walks directly up to your table and stands proudly in a wide stance with folded arms. [I6 – 7]
That’s a creepy intro, isn’t it? Pregnant with possibility. Fraught with subtext. Dripping with the essence of hundreds of Hollywood classics. Such a passage could raise goosebumps if you’re in the right frame of mind, picturing the passage in Technicolour and Panavision. Technicolour and Panavision doesn’t seem quite right, though, not for gothic horror. I’m inclined to see it in B&W, in stark light and cloaked in shadow, and a thousand shades of grey.
Tis October; the season, I suppose, that more than a few DMs, and not a few players, would prefer their adventure to have a certain…theme. There are more than a few scenarios out there that fit the bill, but I expect that none are as tailored to the season as Call of Cthulhu® or Ravenloft®. When I say Ravenloft, I might mean TSR’s 2nd edition campaign setting—either should scratch that itch.
They might, and would, but I’d like to rewind a little and draw our attention to the singular adventure module I6 Ravenloft. It’s the iconic adventure that set D&D down the gothic path that was to be TSR’s template for its aforementioned, then future, setting. And it’s arguably still the best gothic horror adventure TSR or WotC have ever produced. Indeed, it tops more than a few lists as the best D&D adventure of all time, regardless of edition.
Is it? It spawned a sequel. A setting. And it has been rewritten under pseudonyms for each edition. That suggests its continued popularity, and its longevity, I imagine. Reverence, even. Lavished with that kind of love, it keeps rising from the dead, you might say. But is it truly the best adventure of all time?
It might be. It’s a challenge, though. Lethally so. It would be. It’s brimming with more undead than just about every classic horror film combined, what with its zombies and skeletons, its ghosts and ghouls. But it wouldn’t have claimed its beloved top spot because of its abundance of undead “cannon fodder;” it did for its namesake: Strahd. Or should I say Dracula? Bram Stoker’s classic novel is, without a doubt, Strahd’s inspiration. And, indeed, for Ravenloft.
Can I say that? You can bet your bottom vial of holy water, I can. You know it, and I know it. Strahd…. Vlad…. If that were not enough, Strahd’s castle mirrors Vlad’s reclusive fortress in the Carpathians. Secluded. Sinister. Strahd also appears to be as attracted to young maidens as Vlad. Ireena Kolyana and Gertruda vis-à-vis Lucy and Mia. Moreover, he too has maiden vampires to attend to him, an army of gypsies, and a madman at his beck and call in Cyrus Belview, whose diet is as deranged as was Renfield’s.
That’s where the similarities end, though. Mostly, anyway. Where Vlad absconds from his retreat for the happy hunting grounds of London, our heroes must face our villain in his own lair. And where Vlad’s gypsies are a little more dedicated in their service of their master in Stoker’s book, ours take little interest in defending theirs—in text, that is.
The mood is as eerie. 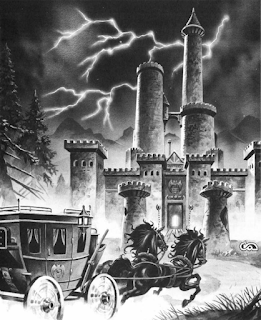 A perpetual rolling blackness of thunderclouds casts a gray pall over the land. The darker silhouette of Castle Ravenloft looks over the valley from its 1,000 foot pillar of rock. [I6 – 6]
Black pools of water stand like dark mirrors about the muddy roadway. Thick, cold mists spread a pallor over the road. Giant tree trunks stand on both sides of the road, their branches clawing into the mists. In every direction the mists grow thicker and the forest grows more oppressive. [I6 – 6]
There is a deathly stillness in the dark Barovian woods. [I6 – 6]
But, where Jonathan Harker could leave at any time, were he able to, our heroes may not.
No one has left Barovia for centuries. This is because of the trapping fog that exists everywhere in Barovia. Once it is breathed, it infuses itself around a character's vital organs as a neutralized poison. […] It does not harm characters as long as they continue to breathe the air in Barovia. However, when they leave Barovia, the poison becomes active. [I6 – 6]
Suffice it to say, Ravenloft would not be Ravenloft without Strahd, as much as “Dracula” would not be “Dracula” without Vlad.
It’s because of Strahd that I6 is #1. And it is because of Strashd that Ravenloft is the challenge it is: A deadly one. Strahd is a vampire, after all. 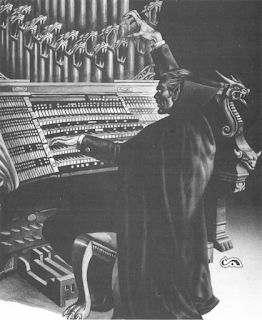 Strahd is a slightly above-average vampire. He has the normal 18/76 strength and his blows drain 2 life levels from his opponents. Strahd has the usual vampire abilities. He can only be hit by magical weapons and can regenerate 3 hit points per round. He can assume gaseous form at will or shape change into a large bat. He can charm person at will by gazing into a character's eyes, causing that character to make a saving throw vs. spells with a penalty of -2. [I6 – 3]
If that were not enough, Strahd is also a 10th level magic user. [I6 – 3]
He's genius and should be played as such. The Hickman’s even say as much.
Strahd chooses when he attacks. Strahd is supposed to be a genius, play him as one. Whenever he is aware of the PCs' positions, he is allowed to make an attack how and where he wants. [I6 – 3]
He knows what the heroes are doing:
Strahd has a variety of spies and servants. They report to him four times each day (at dawn, noon, dusk, and midnight). There is a 60% chance that Strahd knows the PCs' location at these times. [I6 – 3]
And he will choose when and where to attack. To his advantage. [I6 – 3]
Strahd chooses the time and method of his attacks carefully. […]
Strahd knows when to withdraw. He knows when he is in over his head. If he is losing a battle he becomes gaseous, polymorphs into a wolf or bat, and/ or summons other creatures to guard his retreat. [I6 – 3]
It goes without saying that Strahd might be impossible to beat outside his lair. And maybe in the daylight hours…. And even then…. The players had best hope that the final confrontation isn’t in Strahd’s tome—which it most likely will be—because even gaining entry will be a harrowing experience.
‘Nuff said on that. 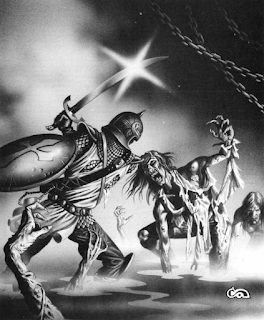 If Strahd were not enough, there are other vampires in the keep. Ghouls, skeletons, and zombies, be they the Strahd variety or not. And banshees and spectres, and wraiths and wights. And in random encounter tables, too! These are not the disarmed 5e undead. They inflict disease and paralyse. They have the capacity to drain levels. Permanently! If the PCs are not lucky, exceedingly lucky, they are going to lose levels, and before long the adventure will be above their pay grade. That will take a toll on the party. No one is going to save against all those attacks.
So, is this adventure survivable? It is. If our heroes are careful. If they have a couple high-level clerics. A paladin would be a boon, too, I imagine. Even then, they are going to have to learn to travel by day. That should be apparent, once they came face to face with the undead once the perpetual twilight sets to darkest night.
I won’t describe the adventure in detail. That would be onerous. If I did, those who know it would be bored; those who don’t will be cheated of their future enjoyment. And claustrophobic terror.
I will say that the descriptive passages are works of art. They set the stage, eevoke the mood, and keep the tension taut.
Take the Burgomaster’s house as example:
The interior of the house is well furnished, although the fixtures show sign of considerable wear. Obvious oddities are the boarded-up windows and the overuse of holy symbols in every room. The Burgomaster is in a side drawing room - dead. He is lying in a room that is dark, despite the candles burning in his honor. The stench in the house is horrible. [I6 – 9]
That passage reeks of fear and desperation.
And take Madam Eva’s tent:
Within, all is dimly illuminated in pools of red light. A small, low table stands across from the doorway, covered in a black velvet cloth. Glints of light seem to flash from a crystal ball on the table as a hunched figure peers into its depths. She speaks. Her voice crackles like dry weeds. Her tone soars and falls like the wind outside. "At last you have arrived!" Her sudden cackling laughter bursts like mad lightning from her withered lips. [I6 – 11]
I love Madam Eva. She’s a cunning old bird.
I’ve gushed on about this module thus far. It deserves such praise, I think. It’s well written, beautifully imagined, brilliantly realised.
Even the artwork is top rate.
But is Ravenloft perfect?
Is anything?
Few Barovian citizens are detailed.
Bildrath, Barovian merchant, LN; Parriwimple, Barovian, LN; Arik, Barovian barkeep, CN; Ismark the Lesser, Barovian, LG; Mad Mary, Barovian, CN; Ireena Kolyana, Barovian, LG; Donavich, Barovian priest, LG; Gertruda, Barovian, NG
That’s the extent of them.
Not a single building in the town is mapped. More damning is the question, “how have these people have survived?” The simple answer is that they survive because it’s Strahd’s desire that they do. They are his larder, so to speak. But there’s nary a farm noted on the map or in the text. There is mention of food—at Strahd’s table, at least:
In the center of the room, a long, heavy table stands covered with a fine white satin cloth. The table is laden with delectable foods of every type: roasted beast basted in a savory sauce, roots and herbs of every taste, and sweet fruits and vegetables. [I6 – 14]
Not so much for the villagers. So, I ask you, how are they sustained? Where do they get their food?
No villager has left Barovia for centuries. Those who tried never returned, dying from the vile snapping teeth of the Barovian wolves and the choking deadly fog. [I6 – 6]
Which is quite a different statement from:
No one has left Barovia for centuries. [I6 – 6]
It’s presumed (by me, at least) that the gypsies can.
The gypsies were given a potion by Strahd that cancels the effects of the fog. This potion is jealously guarded by Madam Eva, who buried it in a secret place. [I6 – 6] 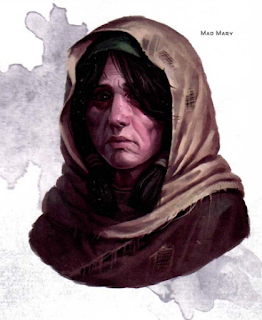 Email ThisBlogThis!Share to TwitterShare to FacebookShare to Pinterest
Labels: AD&D, I Series, Modules