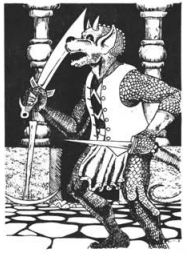 They began as sprites, akin to brownies and goblins, when those terms were somewhat interchangeable. That’s all interesting and esoteric, and far removed from fantasy gameplay. They are not fey in Dungeons and Dragons, and never have been; and they are certainly not beneficial or helpful. They are evil beings, whatever their origins, and they hate all life. Why? Because they are evil, that’s why. They are not a noble draconic race; they are not craven, yet industrious slaves who only hate those who enslave them—maybe they are, if you’re new-school, but I’m old school, and monsters were created to be at odds with the world at large (blame Tolkien and a whole host of other writers of the past for that). So, why do kobolds hate all other races? Probably because most other evil races enslave and abuse them. Orcs did, because kobolds speak orcish in AD&D: slaves need understand their master’s commands. They speak goblin, too; and I would suggest that they speak hobgoblin, as well, even if they are not said to, because goblins and hobgoblins and orcs speak kobold. Dwarves do too, and gnomes. No mention was ever given as to why. Or how. One would wonder who taught them?
In addition to the tongues of lawful evil and kobolds, these monsters can usually (75%) speak goblin and orcish. [MM1e]
Kobolds speak their own language; some (75%) speak orc and goblin. [MM2e]
That makes more sense, what with those species enslaving kobolds for their uses.
3rd edition dispenses with some of the prior logic.
Kobolds speak Draconic with a voice that sounds like that of a yapping dog. [MM3e]
3e does not dismiss whether certain kobold speak orcish or goblin or hobgoblin, or ever common, for that matter. I would suggest that some kobolds, headmen and shamans and sorcerers might know more than one.
Because kobolds are so abused, they hate all other species so much they rejoice in inflicting torture upon them, if and when they can capture them. (Maybe not all others, but more on that later.) They hate fey above all others. And gnomes. Particularly gnomes. And gnomes hate them.
Kobolds hate most other life, delighting in killing and torture. They particularly hate such creatures as brownies, pixies, sprites and gnomes. They war continually with the latter, and will attack them on sight. [MM1e]
[The gnomes’] great hatred of kobolds and goblins, their traditional enemies, gives them a +1 on their attack rolls when fighting these beings. [MM2e]
Why might that be? Might gnomes be distantly related to fey? Could they be fey dwarves, as it were?
There is idle speculation that kobolds are related to goblinoids, but I would take that with a grain of salt:
It is possible that goblins are distantly related to kobolds. Like the latter, goblins enjoy dwelling in dismal surroundings, although they tend to inhabit coves and similar underground places in preference to any habitation above ground. They too hate full daylight and attack at a -1 when in sunlight. [MM1e]
I find it this highly unlikely. Whichever sage wrote that has never ventured far from the Free City of Greyhawk. Kobolds lay eggs. Goblins do not. It’s far more plausible (to my mind) that kobolds could be draconic fey than goblinoid, that they, and maybe dragons—their more likely distant kin—have fey origins. Imagine that they were cast down, and out of the feywild…. That would explain their hatred of all fey. And gnomes, for that matter…. No matter; that’s idle speculation.
What we do know is that the gnome god, Garl Glittergold, played a trick on the kobold god, Kurtulmak, and they have hated one another since.
However, there is another side to Garl than that of the witty adventurer who collapsed the Kobold King's cavern. [Deities_1e] 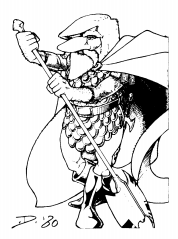 Garl Glittergold, deity of the gnomes, once collapsed Kurtulmak’s cavernous home as a joke. The event wounded Kurtulmak’s pride on two fronts, as he considered himself both an expert trickster and a miner without equal. Since then Kurtulmak has hated Garl and all gnomes. [Deities 3e]
Back to the question at hand. What are kobolds, exactly, in game terms?
Kobolds are the “weakest” of foes in D&D.
Kobolds, goblins, orcs, etc. are all powerless to affect elementals because they have neither magical property nor four or more hit dice. [MM1e]
Yes, there are weaker monsters, but we are discussing organized groups here and not ear grubs and the like. So, how weak are they? They are not particularly hearty, 1-4 hp, not even 1HD. That’s rather fragile, by all accounts, and would also explain their high birthrate.
But they are not much weaker than your average 0-level human.
What they are is dexterous, fleet of foot; you would be too if you were the wiping boy of the underoerth.
They aren’t stupid, either, always noted to be of average intelligence (8-10). They may not be genius, but they are smart as the average 0-level human.
But they are seen as stupid, are they? Only the foolish would believe it.
Kobolds are a cowardly, sadistic race of short humanoids that vigorously contest the human and demi-human races for living space and food. They especially dislike gnomes and attack them on sight. [MM2e]
Cowardly? Don't you believe that for an instant. What they are is tenacious tinkerers. They persevere. Despite their supposed weakness.
Sadistic? Maybe. Most likely.

Barely clearing 3 feet in height. kobolds have scaly hides that range from dark, rusty brown to a rusty black. They smell of damp dogs and stagnant water. Their eyes glow like a bright red spark and they have two small horns ranging from tan to white. Because of the kobolds' fondness for wearing raggedy garb of red and orange, their non-prehensile rat-like tails, and their language (which sounds like small dogs yapping), these fell creatures are often nor taken seriously. This is often a fatal mistake, for what they lack in sire and strength they make up in ferocity and tenacity. [MM2e]

That’s fairly vague. One requires a picture to truly describe them. They’re described as scaly, and smelling like damp dogs, and in early days they were always described as being so—maybe not in text, but certainly around the table—although the artwork begs to differ. In the picture panels, they might look somewhat canine, but they really look draconic, or reptilian, at the very least.
That’s barely more than what was written in the AD&D Monster Manual:
The hide of kobolds runs from very dark rusty brown to a rusty black. They have no hair. Their eyes are reddish and their small horns are tan to white. They favor red or orange garb. Kobolds live for up to 135 years. [MM1e]
That’s long-lived by most reckoning, considering their high birth rate, which usually indicates a need to replenish their numbers quickly.
30-300 eggs. [MM1e]

KoboIds are egg-laying creatures. They mature quickly and can live to be "great wyrms" more than a century old. However, many kobolds perish before they reach the end of their first decade. Physically weak, they are easy prey for predators. This vulnerability forces them to band together. Their superior numbers can win battles against powerful adversaries, but often with massive casualties on the kobold side. [MM5e]

Kobolds are craven reptilian humanoids that worship evil dragons as demigods and serve them as minions and toadies. Kobolds inhabit dragons' lairs when they can but more commonly infest dungeons, gathering treasures and trinkets to add to their own tiny hoards. [MM5e]

KOBOLDS REVERE DRAGONS and tend to dwell in and around places where dragons are known to lair. They skulk in the darkness, hiding from stronger foes and swarming to overwhelm weaker ones. Kobolds are cowardly and usually flee once bloodied unless a strong leader is present.
Kobolds like to set traps and ambushes. If they can’t get their enemies to walk into a trap, they try to sneak up as close as they can and then attack in a sudden rush. [MM4e]

Kobolds are skilled at making traps, which they use to capture prey and to acquire sacrifices for their dragon lords. [MM4e]

Kobolds infest the lairs of many black dragons like vermin. They become as cruel as their dark masters, often torturing and weakening captives with centipede bites and scorpion stings before delivering them to sate the dragon's hunger. [MM5e]

Green dragons accept the servitude of sentient creatures such as goblinoids, ettercaps, ettins, kobolds, orcs, and yuan-ti. They also delight in corrupting and bending elves to their will. A green dragon sometimes wracks its minions' minds with fear to the point of insanity, with the fog that spreads throughout its forest reflecting those minions' tortured dreams. [MM5e]

The only creatures that typically serve a white dragon are intelligent humanoids that demonstrate enough strength to assuage the dragon's wrath, and can put up with sustaining regular losses as a result of its hunger. This includes dragon-worshiping kobolds, which are commonly found in their lairs. [MM5e] 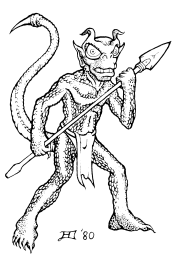 In addition to the dragons they revere, kobolds worship a lesser god named Kurtulmak. Legends speak of how Kurtulmak served as Tiamat's vassal in the Nine Hells until Garl Glittergold, the god of gnomes, stole a trinket from the Dragon Queen's hoard. Tiamat sent Kurtulmak to retrieve the trinket, but Garl Glittergold played a trick on him, collapsing the earth and trapping the kobold god in an underground maze for eternity. For this reason, kobolds hate gnomes and pranks of any kind. Kurtulmak's most devoted worshipers dedicate themselves to finding and releasing their lost god from his prison-maze. [MM5e]
What have we learned about these supposedly low beasts?
Simply, that they are not beasts at all. They are artisans! True, they are not as bright as a great many other foes, but they make up for that with cleverness and guile.
And they are somewhat symbiotic to other “greater” reptilian beings. That makes them low HD, high level monsters. It is a very brave and foolhardy adventurer that would delve into their lair. Because he would surely not return. It matters not how may kobold he kills. There are always more.
“The chief once asked me what kobold warriors could do to counter the tactics of adventurers. All I could come up with was, ‘Kill themselves to deprive the adventurers of the pleasure.’”
— Mokumok the Shaman
Dragon #342 (2006)

One must always give credit where credit is due. This post is made possible primarily by the Imaginings of Gary Gygax and his Old Guard, Lenard Lakofka among them.