Thoughts on A4 In the Dungeons of the Slave Lords

Thoughts on A4 In the Dungeons of the Slave Lords

“I can only note that the past is beautiful because one never realises an emotion at the time. It expands later, and thus we don't have complete emotions about the present, only about the past.”
― Virginia Woolf

Trapped in the dungeons of the Slave Lords! The hardy adventurers must find a way out, with only their wits and courage to help them. But can they do it before everything is destroyed by the dreaded Earth Dragon? [A4] 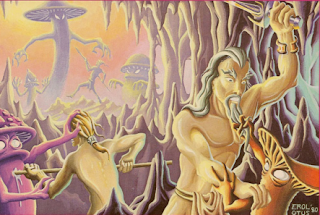 So writes Lawrence Schick as he introduces A4 In the Dungeons of the Slave Lords.  Vintage players know how the PCs found themselves trapped in the slavers’ dungeons, but for those who do not, I present to you the story thus far:
Slavers had been attacking the coasts of the Azure Seas for years, laying waste to towns and carrying away its citizenry. Those fortunate enough to be affluent could be ransomed. Not so those serfs and peasants and fisherfolk caught in their net. Their fates were sealed.
Adventures were called upon to seek out the slaver’s hidden bases, and those that did, found fronts and blinds in Nyrond and Almor, in Onnwall and Indee; indeed in each and every nation that were beset upon. But where was the Slavers’ secret base? All clues led to the Pomarj, sundered since the Hateful Wars. An assault upon the once great city of Highport was doomed to fail, however; so, [rather than sending] troops, the lords first cautiously dispatched bands of adventurers. Their mission: find the ultimate stronghold of the slavers and destroy the Slave Lords, thus ending their power. [A4]
And they did. But they soon discovered that putting and end to the Slavers’ operations in Highport was only the beginning, for correspondence discovered in Highport led the adventures into the Drachensgrab mountains, where horror upon horror led them to the Slavers’ aerie of Suderham.
The adventurers attacked the Slave Lords in their lair beneath Suderham, but on the verge of victory, the party was defeated by an impassable sleeping-gas trap. The sleeping adventurers were ignominiously stripped of their belongings and dragged to the dungeon cells beneath Drachen Keep, the forbidding tower on a plateau above the town. [A4]
They woke to discover themselves bereft of all their arms and sundries, if not their skill.
Time passed. Torturously. I mean that both figuratively and literally.
Something finally occurs to break the monotony of imprisonment: the stone shudders and the earth growls as a large tremor rocks the island. Dust filters down from the ceilings of the cells, and the adventurers can hear much shouting and commotion among their captors. After a short period, the doors to the dungeon clang open, and in walks the stronghold’s evil High Priest, surrounded by guardsmen. “The Earth Dragon has spoken!” he announces. “He is hungry, and the time has come to feed you to him, as is our sacred custom. O miscreants, now you shall pay for the havoc you have wrought. Guards, subdue them with the Smoke of the Little Death.”
He turns and leaves, and the guards go with him. Shortly, however, there is a click as a small aperture is opened in the dungeon door. Through it comes the end of a tube, which spews out the green sleep smoke the characters remember so well .... [A4]
The party awakens in a place where there is no light and no sounds but their own. Characters with infravision can ascertain that all party members are presented. The place they are in looks and feels like a natural cave, about 30 feet in diameter. There are four 10’ high exit tunnels somewhat evenly spaced around the perimeter. Characters with infravision cannot see a ceiling; apparently it is too high. The floor is covered with sand. None of the party have any possessions save a dirty cotton loincloth. They have no weapons, no food, nothing: only their wits, and a small closed cloth tube which rests on the floor in the center of the room. It is a foot-and-a-half long, about the size of a wand or scroll tube. [A4]
It was Selzen Murtano who dropped the package for them to find. Remember him? The beggar at Suderham’s gate? To be fair (or less brutal, this not being a tournament), have Mutano leave then a few daggers, as well. More on him later. 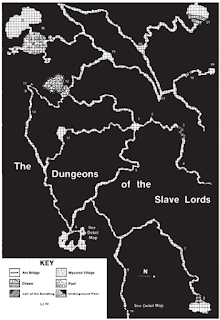 The stage is set for one of the most challenging of tournament modules. The PCs must escape from the caverns before the volcano in which they awakened collapse.
All they have at their disposal is their wit and skill. Will that be enough?
The premise of this module was not Lawrence Schick’s. It was Harold Johnson’s, the writer of A2 Secret of the Slavers Stockade. It was he who first stripped the PCs of their worldly possessions, forcing them to rely on their wits instead.
But it was Schick’s idea to adapt the adventure to tournament play when players at GENCON began demanding that there had to be a reason for monsters to be where they were, just as there had to be a reason for the adventurers to have plumed their depths. Schick, David Cook, Allen Hammack, and Johnson rose to the occasion with the help of Tom Moldvay, and wrote what is now considered one of the finest of adventure paths ever. Later compiled into one adventure, 1986’s Scourge of the Slave Lords is heralded as the 20th greatest adventure in D&D history.

This was one of my favourite modules of those early days. I did not play many. But of those that I did, this was one of the most challenging. And exhilarating.
Looking back, is it as good as I remember? Mostly. Would I change much? No.
As I mentioned when reviewing A3 Aerie of the Slave Lords, I would remove reference to the dreaded Earth Dragon. It is not required. Instead, I’d replace it with the Elemental Eye, first mentioned in A0 Danger at Darkshelf Quarry. Aside from that, most encounters feel like they should, or could be there. There are kobolds and giant ants, and creatures akin to ropers. There are a lot of fungi, this being where the myconids made their debut. 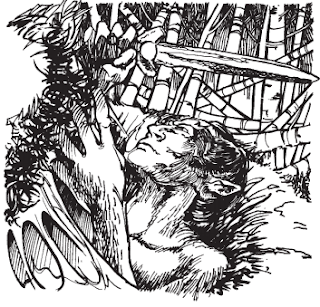 More importantly, there is an epic conclusion to the adventure path. Having escaped from the caverns the PCs awoke in, they witness the imminent destruction of Suderham. The Slave Lords are fleeing and it’s up to the PCs to confront them and put an end to their evil schemes, once and for all.
It will be difficult, at best. Potentially lethal, in fact. The PCs do not have their equipment, only what they’ve been able to scrounge during the course of the past hours. Luckily, the Slave Lords are not at their most prepared, either, owing to their ordeals since Mount Flamenblut began to tear itself apart.
Mutano is there to greet them before the finale.
Selzen Murtano is a slender man with attractive features and a sly wit. He’s prone to impulsiveness and sometimes acts without thinking. He keeps his black hair short and his face shaved. He wears fine studded leather armor and keeps a longsword in a scabbard hanging from his belt. In addition to weapons and armor, Selzen has a padded wallet containing thieves’ tools. [D215] 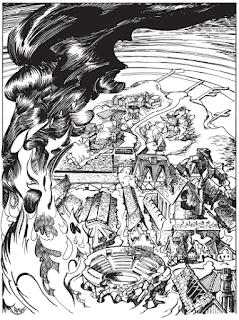 This is the beginning of the docks area. To the west, the rattletrap houses of Scumslum are going up in flames, the fire leaping from one to the next. Northeast remove is the first dock. Only one boat is tied there, a small galley emblazoned with a finned dragon. Without warning, a man dressed as a Slave Lord lieutenant runs toward the party from behind a nearby house, shouting loudly. [A4]
We’re told that the PCs’ gear is on the Water Dragon, but I’d have Murtano have a few gifts for our heroes beyond those mentioned to help them in the battle to come. Healing potions. Scrolls. Maybe a weapon or two.
Murtano will give the party two scrolls he managed to filch from Drachen Keep: a clerical scroll of four spells (cure serious wounds and 3 cure light wounds), and a magic-user’s scroll of five spells (sleep, invisibility, strength, dispel magic, and hold person). All spells are at the 7th level of use. He will also give the characters a crystal monocle with a permanent read magic cast on it, to enable the spellcasters of the party to make immediate use of the scrolls. [A4]
Which Lords are left to face? The high priest Stalman Klim, the aforementioned Mordrammo of A3; Theg Narlot, the slavers’ master of espionage; Lamonsten, their illusionist of note who has hitherto remained unnoted; the Scarlet Brotherhood’s Kerin, disciple of Brother Milerjoi, both of whom were mentioned in A3; Slippery Ketta; and Edralve, an exiled drow from Erelhei Cinlu.
What happened to Feetla, Milerjoi, Ajakstu, and Neralas? Who knows? We are left to wonder at their fate.
Should you slow the pace of the overall adventure, a number of these august personages could be well known to the PCs, and to you for that matter, by adventure’s end. And they would know the PCs, too. “You again?” Klim screams upon recognizing the party as they resolve from the smoke and slaves that had hidden them from view until then. “No matter. You’ll be dead soon.”
This will make the final confrontation more satisfying, in the end.
Personally, I’d reserve Klim and Feetla for The Last Slave Lord, should you wish to run that. Have them escape. Have the characters see them flit away by however means before the final conflict.
Or not. Klim’s future has been secured, regardless.
As to Ketta? Has she been present throughout the campaign, as I suggested? All the better. Has she been redeemed? Unlikely.
And Ajakstu? If you recall, I suggested that he become a she, and that she be LN and not the unspecified evil expected. Did she survive A3? Was she killed by her own? Did she, could she, betray her assigned cause, assigned to her by the Scarlet Sign?
But death is rarely the end to such dastardly foes.
2013’s The Last Slave Lord in Dungeon magazine #215, details how Klim’s evil endures.
Stalman Klim and the other Slave Lords found death in the ensuing battle. The clone was still growing when Klim died.
Now, in the weeks after the disaster, his soul waits inside the developing body, knowing his chance for revenge is at hand. [D215]