Thoughts on A2 Secret of the Slavers Stockade

Thoughts on A2 Secret of the Slavers Stockade

“There was a long hard time when I kept far from me the remembrance of what I had thrown away when I was quite ignorant of its worth.”
― Charles Dickens, Great Expectations
The battle against the slavers continues! You and your fellow adventurers have defeated the slavers of Highport, but you have learned of the existence of another slaver stronghold, and you have decided to continue the attack. But beware! Only the most fearless of adventurers could challenge the slavers on their own ground, and live to tell of it! [A2] 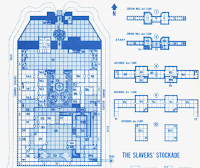