“When avarice takes the lead in a state, it is commonly the forerunner of its fall.”
― Alexander Hamilton
Little is known about the Flanaess’ Pre-Migration history. Mayhap we have the Oeridians to blame for that. They marched across the continent, sweeping its history aside as they went, declaring “Hail the conquering hero!” There was nothing there before them, they say. A few elves, a scattering of gnomes and dwarves, a few hunter-gatherers, and one or two agrarian groups of little concern: The Flan, a people of little note or consequence.
The Flan were the first known humans to live in eastern Oerik, and it is from them that the Flanaess gets its name. [LGG – 5]
The fierce Oeridian tribes likewise moved east, thrusting aside Flan and Suloise in their path. [Folio – 5]
Migrating bands began settling the eastern portion of the Oerik Continent, Flanaess, over a millenium ago. The Flan tribesmen were hardy and capable hunters but not particularly warlike, and their small and scattered groups made no appreciable civilizing effect. [Folio – 5]
Thus, the history of the Flanaess is theirs.
That’s what the Oeridians believe, and that is what we now believe, seeing that theirs’ is the written history we have. Such is the spoils and legacy of victors.
But they could not erase what came before, not entirely. The Past persists, in song, in sagas and legends, carved in clay tablets and stone.
One persistent legend among the Flan is that of a wondrous citadel, said to have sat near the very heart of the Flanaess in ancient times, when kingdoms of the Ur-Flan spanned the length and breadth of the subcontinent. Known as Veralos, a word meaning “aerie” in the ancient tongue of the Flan, the structure was supposedly erected somewhere near the cracked and broken ridge of the Rift Canyon, in what is now referred to as the Bandit Kingdoms. According to the oral traditions, the stronghold was the retreat of princely Ur-Flan scholars, artisans, and mystics in ancient times. It was a repository of great knowledge, learning, and contemplation, drawing disciples from many neighboring kingdoms. These highly-skilled Flan were said to have created extraordinary wonders (such as magical tablets, statuary, ensorcelled jewelry, and astounding weapons) often by commission for the lords of lands such as Sulm, Itar, Ahlissa, and Nuria. The gathered lords of the citadel even paid fealty to the Wizard-Priests of the Isles of Woe, until that fell dominion sank beneath the waves early in prehistory. [Dragon #293 – 90]
The kingdoms of the Ur-Flan?
Varalos. Sulm. Itar. Ahlissa. And Nuria. These names endure. So too the wizard-priests of the Isles of Woe, however forgotten and mysterious.
Isle of Woe
Rumors abound that the lake holds the sunken remains of an ancient pre-Migration civilization known as the "Isles of Woe," though many have explored the lake to no avail. [LGG – 149]
According to legend, the Isles of Woe once stood in the Nyr Dyv, but no reliable source catalogs their size, exact location, population, or even their number (usually put at three but ranging up to seven, depending on the story). The isles are said to be so ancient as to predate the arrival of the Oeridians. The origin of their name is unknown, but they are always said to have been highly magical. [TAB – 5]
The isles seem to be peaks associated with the easternmost branch of the Cairn Hills, just north of the Duchy of Urnst. [TAB – 5]
The lake of Unknown Depths is said to have once held a number (sources vary between three and seven) of very magical islands called the Isles of Woe, which apparently sank beneath the waves over a thousand years ago. [Slavers – 17]
Occasionally, strange silver coins and jewelry and even stranger obsidian carvings, found by lucky divers, make their way to market, but these are generally discounted as forgeries. [LGG – 149]
So much for there was nothing here before We arrived. 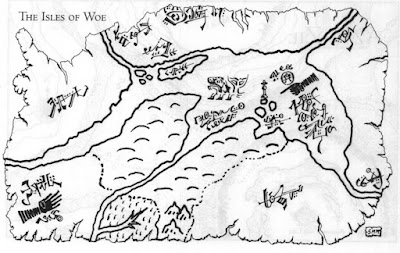 Email ThisBlogThis!Share to TwitterShare to FacebookShare to Pinterest
Labels: Isle of Woe, Tzunk