“What is the universe
but a lot of waves
And a craving desire
is a wave…”
― Jack Kerouac, Scattered Poems
“I looked upon the sea, it was to be my grave”
― Mary Shelley, Frankenstein
A casual observer to the Asperdi's ragged coasts might wonder, why in gods’ name would anyone want to live here?
Lashed by winds that never cease, these high cliffs and rocky shores are beat upon by an endless parade of rolling waves and spray that thunder and roar as though besieged by the wrath of those sea monsters the charts and maps invariably declare dwell east of here. Here be dragons, they say.
These Asperdis, they've gazed out on this, that long lonely frightening expanse of sea since before time reckoned. Since before the Aerdi came. Before the Suel. Indeed, even before those first Flan stitched their seagoing rafts together and ventured out into that unknown the elves had always warned them against. Here they landed, and here they stayed, perched above the cliffs, never knowing, but always wondering how vast that rolling sea stretched. Wondering if it might reach out into eternity. Where monsters really do dwell.
The Asperdi Isles are a hard, if plentiful, land. It's pleasant, even bucolic, once you scale the walls, and mount the grassy hills of the interior, where the sun basks the heights, and the crests and troughs undulate with grain and pastoral fields aplenty. Indeed, the coasts are not all rocky, not all beaten upon by the sea. Where the iguanas give way to gentle coves and inlets, tall palms are weighed down with bananas and figs, with galda and plantains. Wild goats clamber over cliffs, and gulls wheel in numbers beyond belief. The seas here are as rich as any. It's no wonder those that crossed the Bay of Gates have clung as tenaciously to these islands as they have. And it's no wonder why they have each in turn fought as fiercely as they did against those who'd weighed anchor in their sheltered bays.
One would be mistaken in believing these lush lands to be paradise, though. They may look it, but its coastal cities are a dangerous place, where the "sharks" are as voracious above as those beneath the sea.
There are as many raiders and pirates ashore as asea, both foreign and domestic; slavers plying their trade – don't judge 'em, everyone has a right to earn an honest living, don't you know –; and spies from every port the old salts can recall spying. And o'er the horizon? There are whispers of nagas and sea serpents beneath the waves. Talk of kraken and sahuagin and ancient civilisations that lurk in the dark depths, that rise up when the moons are new, tentacles wavin', tridents thirsty for blood, towers twinklin' in the pitch, depending on which you're alluding to. They beach ships, they do; and drag them down to the bottom of Dahsy Johs' Locker when they dive back down, the lot of them. Or so the old sharks say.
One might think it safer to sea, where all a shark has to worry over is keeping the coasts and trade routes safe from those pirates to the north and south, as we always have. Not that those lubbers inland give credit where its due. But that's always been the way, hasn't it?
Have I put the fear in you?
All I can tell you is to keep your mouth shut while you're here. You never know which side a listener is on. Or what he's listening for. Keep an ear tuned for a creak of a plank when you bunk down, whether in tavern or inn or still on your ship. And keep a hand on your dagger just in case there's someone skulking in the shadows, or some foul fishy thing has come out of the brine, drippin', slaverin', lickin' its lips. Do them things down there have lips? Or just teeth? Thoughts like that can keep you up at night, can't they?
Those who wish to campaign where the oerth is awash with swashbuckling swords and international intrigue will be well-suited by placing their game in the isles of the Sea Barons. Danger is everywhere, and no end to the possibility of adventure:
The Barons are caught between the south Province – the United Kingdom of Ahlissa, as it came to be known – and the North – the self-described Great Kingdom of Northern Aerdy – each demanding loyalty; between the Twin Cities and Ratik, each professing good will; and betwixt wars waged upon the Flanaess and the machinations of the Scarlet Brotherhood. Barbarians raid the coasts from their icy north; and those swaggering pirates of the Lordship of the Isles are lurking to the south, poised to pounce from the narrows to the south. It's a good thing, then, that the Sea Barons don't trust any of them, because they are literally caught between a rock and the mysteries of the deep blue sea.
Inspiration can be found in the Pirates of the Caribbean films. Nautical adventure might be inspired by the “Master and Commander” series, by Patrick O’Brian; as well as “Treasure Island” and “Kidnapped,” by Robert Lewis Stevenson; and Herman Melville’s “Moby Dick.” Joseph Conrad’s “Heart of Darkness,” and the film “Apocalypse Now” evokes tropical possibilities.
Further inspiration can be found in the “Golden Age of Piracy”: “A General History of Pyrates,” by Daniel Defoe; “Pirates: A complete History From 1300 BC to the Present day,” by Angus Konstrum; and “Pirates: A New History, from Vikings to Somali Raiders,” by Peter Lehr.
Might I also recommend: “Borderland Smuggling” Patriots, Loyalists, and Illicit Trade in the Northeast, 1783-1820,” by Joshua M. Smith.
Country specific resources: 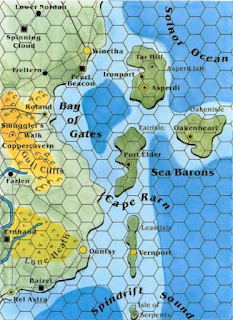 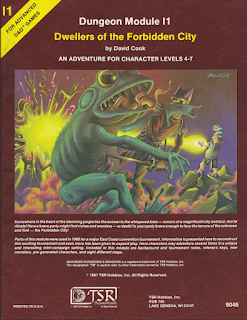 World of Greyhawk Gazetteer (Gold Box), Jungle of Lost Ships
World of Greyhawk Gazetteer (Gold Box) Werewolves of the Menowood
The Stolen Seal, World of Greyhawk Boxed Set, Ratik
The Dancing Hut of Baba Yaga
Forge of Fury, Bone March
I1 Dwellers of the Forbidden City, Hepmonaland
I12 Egg of the Phoenix, Dullstrand (noted on Canonfire! It’s a bit of a stretch, but it you flip the map…)
S1 Tomb of Horrors, The Vast Swamp
Return to the Tomb of Horrors, The Vast Swamp
L1 The Secret of Bone Hill, Spindrift Isles
L2 The Assassins Knot, Spindrift Isles
L4 Devilspawn, Spindrift Isles (available on Dragonsfoot)
L5 The Kroton Adventures, Spindrift Isles (available on Dragonsfoot)
Dungeon #4 – Kingdom of the Swamp, Generic
Dungeon #37, The Mud Sorcerer's Tomb, Bone March
Dungeon #71 – Priestly Secrets, Spindrift Isles
Dungeon #84, Armistice, Griff Mountains
Dungeon #87, The Sharm’s Dark Song
Dungeon #87 – Glacier Seas
Dungeon #89 – Wedding Bells, South Province/Ahlissa
Dungeon #91 – Kambranex’s Mechinations, South Province/Ahlissa
Dungeon #95, The Witch of Serpent's Bridge, Schnai
Dungeon #121/Ghosts of Saltmarsh – The Styes, South Province/Ahlissa
Dungeon #123 – The Salvage Operation, Tivenot Peninsula
Dungeon #148, In the Shadows of Spinecastle, Bone March
Although later retconned into the Yeomanry, B1 Into the Unknown (in the monochrome edition) was originally suggested as located in Ratik. That would make north Ratik an ideal location for B1 Keep on the Borderlands, as well. 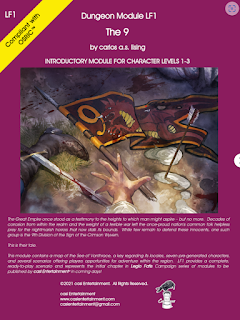 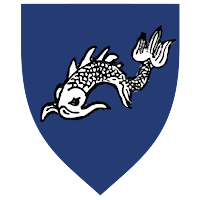