You will never find a more wretched hive of scum and villainy ."
—  Obi-Wan Kenobi
“Maybe there is a beast… maybe it's only us.”
― William Golding, Lord of the Flies
Winter is long. Life is short. So the saying goes in the Bandit Kingdoms. The Free Folk should know. Winter is long, and cold; the windblown sleet and snow is so icy it will turn your head around. What is more, the summers are dry, the soil is poor, and the growing season no longer than the bat of an eye. As to life; that depends, doesn’t it? Do you venture out in the dark of night? Can you keep your mouth shut? Do you love Iuz? Are you well connected?
It’s a wonder as many people live in these lands as they do. Or that any chose to come here in the first place. But there was silver in them thar hills, once. Or should I say, in them Rifts?  That’s what drew those first settlers, once the heathen Rovers were pressed north to make room for honest folk, and peace, progress, and empire. The Flan had never made proper use of the land, anyway. Not that it was much use: the soil was rocky, and little more than boulder clay; and what with the profusion of firs, it was acidic, too. It was barely tolerable to beans and taters, and hardly tolerable as pasture. But there was silver, and plenty of it, while it lasted. It’s no wonder the Flan didn’t even fight for it, much.
Some say there were those Flan who did, or sought to, even if they didn’t. Ur-Flan artisans, they say. Tall tales tell that the people of Veralos thought to use magic to dissuade the Aerdi from coming, that they implored an ancient and wizened prophet with talent in one Art or another to do the deed. There are those who even whisper that the doer was Keraptis, himself; but that’s neither here nor there. Those Aerdi scouts that did come said that they found an abandoned town on the edge of the Rift. It was ancient, they said, yet tables were laid, as though to sup, and the hung herbs still smelled fresh. Round the decay, nothing stirred, the only sound the rustling of the wind on the birch and poplar that hid it from sight. That’s no never mind, the Free Folk say. That was long ago. Just talk.
The Kingdom did come, and it lorded over these parts for centuries, put they paid it no heed. There was no profit in it, once the silver played out, some said. Folk took to raiding to make ends meet, usually against the “haves” to the south, and uppity Flan to the north, sometimes even into the Shield Lands if they were bold enough, or into the Hierarch’s demesnes, if they were brazened enough; but they weren’t above taking what came from the other kings and grafs and princes of the “Combination of Free Lords,” if they were too weak to hang on to what they thought theirs. That’s just the way of things here. You have to make ends meet, come what may, as they say.
So it remained until Iuz came.
Then everything changed. The Lords fell; or capitulated, if they knew what was good for them. Iuz’s Boneheart moved in. And the wheel turns.
Hail Iuz!
Be quick to “hail” when hailed, if you know what’s good for you. And trust no one. Not your friends. Not even your grandmare. After all, you never really know where another’s loyalties might lie, do you?
Adventures in the Bandit Kingdoms center on the political machinations of the various warlords and powerful merchants as they send adventurers to deal with pesky monsters, guard caravans of pilfered loot, hunt down betrayers, or wreak havoc on their enemies’ interests. Bizarre monsters from the Fellreev Forest and Rift Canyon must be dealt with. Beware the dragons in the Fellreev Forest (green), Rift Canyon (red), and White Plume Mountain (dracolich)!
The Combination of Free Lords, a.k.a. the Bandit Kingdoms, is comprised of roughly a dozen fiefdoms —  the inhabitants of which are almost all uniformly unpleasant to friends and foes alike. Surrounded by enemies, the local warlords band together to raid nearby nations. If your campaign is set pre-Greyhawk Wars, the local warlords often fight among themselves when not raiding. If your campaign is set after, the Bandit Kingdoms suffer Iuz’s occupation and yearn to break free of the evil demigod’s chains. In the Bandit Kingdoms, anyone powerful enough to raise a small army can rise to power…but not everyone can keep it.
Inspiration for campaigning in the Bandit Kingdoms can be found in the “Thieves’ World” anthologies, edited by Robert Lynn Asprin and Lynn Abbey; “The Black Company series,” by Glen Cook.
Inspiration may also be had from the AD&D 2nd Ed. accessory: “Lankhmar, City of Adventure” (TSR_2137)
Further inspiration can be had from “The Rise and Fall of the Third Reich,” by William L. Shirer. 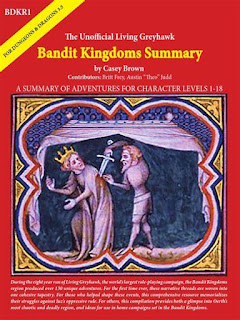 Adventures in nearby areas include:
WG8, Fate of Istus, #2 Nyrond, #5 Pale
WGS2 Howl From the North
WGR5 Iuz the Evil
The Dancing Hut of Baba Yaga
Fright at Tristor, Theocracy of the Pale
Forge of Fury, Bone March
The Mud Sorcerer's Tomb, Dungeon #37, Bone March
Ex Keraptis Cum Amore, Dungeon #77, Burning Cliffs
Deep Freeze, Dungeon #83, Theocracy of the Pale
Armistice, Dungeon #84, Griff Mountains
The Sharm’s Dark Song, Dungeon #87
Glacier Seas, Dungeon #87
Beyond the Light of Reason, Dungeon #96, Tenh
Raiders of the Black Ice, Dungeon #115, Blackmoor
Ill Made Graves, Dungeon #133, Jotsplat & the Icy Sea
Tomb of Zhang the Horrific, by William Dvorak, Rovers of the Barrens.
C13 From His Cold, Dead Hands, by Carlos Lising, casl Entertainment, 2019, Jotsplat & the Icy Sea
C14 The Sanguine Labyrinth, by Carlos Lising, casl Entertainment, 2019, Burning Cliffs
C17 The Root of All Evil,  by Carlos Lising, casl Entertainment, 2019, Burning Cliffs
FB1 While on the Road to Cavrik's Cove, casl Entertainment, 2021, Ratik
Although later retconned into the Yeomanry, B1 Into the Unknown (in the monochrome edition) was originally suggested as located in The Duchy of Tenh or the Theocracy of the Pale. That would make either an ideal location for B1 Keep on the Borderlands, as well.
Pholtans from the Theocracy of the Pale to the east seek to break Dimre’s defenses.
The Tenha city of Redspan vies with Rookroost for control of the Artonsamay River’s northern traffic.
Nomadic barbarians of the Rovers of the Barrens dominate the wild plains to the north.
Devils stalk the Horned Society’s lands while paladins in the Holy Realm of the Shield Lands seek to curtail bandit and infernal invasions alike to the west.
County of Urnst shipping on the Nyr Dyv is often harassed by corsairs out of Alhaster.
Heroic campaigns are difficult to set in the Bandit Kingdoms. Paladins are generally run out of town by the local populace for being nosy do-gooders. In addition, there are few ancient dungeons to explore (except for Nerull’s Bane in the Fellreev Forest and Wormcrawl Fissure in the Rift Canyon). 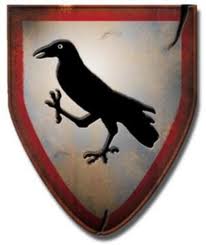 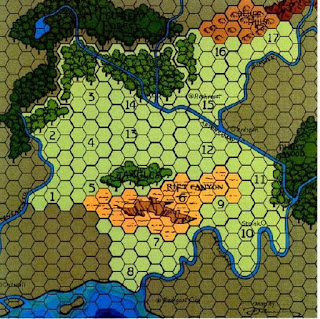 4. Abbarra;
9. Artonsamay, Duchy of the;
11. Dimre, Grand Theocracy of (independent);
16. Fellands;
3. Freehold, Mighty;
14. Greenkeep, Defenders of the;
17. Groskopf, Grand Clans of;
12. Johrase, Kingdom of;
13. Midlands, Stronghold of the;
8. Redhand, Principality of;
7. Reyhu, Great Lands of;
6. Rift, Men of the;
15. Rookroost, Free City of;
10. Stoink, Free City-State of;
5. Tangles, Earldom of the;
1. Warfields, Unified Bands of the;
2. Wormhall, Barony of
[Dragon #63 – 14]
One must always give credit where credit is due. This History is made possible primarily by the Imaginings of Gary Gygax and his Old Guard, Lenard Lakofka among them, and the new old guards, Carl Sargant, James Ward, Roger E. Moore. And Erik Mona, Gary Holian, Sean Reynolds, Frederick Weining. The list is exhaustive.
Special thanks to Jason Zavoda for his compiled index, “Greyhawkania,” an invaluable research tool.
This Primer has been expanded from the original “Touring the Bandit Kingdoms Postcard” on Canonfire! written by Casey Brown, and some passages from that scholarly work reside with this piece.
The Art:
The-Grand-Gate by merl1ncz
Fantasy-Architecture by alexjjessup
Alhaster, from Dungeon #131, pg. 80, 2006
The-Last-Morrigan by theenderling
Winter-is-Coming-Cinematic by m-delcambre
Assassinat de sigebert, ler Grande Chroniques de France (Bibliotheque Nationale de Fance, Paris), and The Unofficial Living Greyhawk Bandit Kingdoms Summary cover, 2012
WG8 Fate of Istus cover, by Daniel Horne, 1989
Bandit Kingdom heraldry, from the Greyhawk Folio, 1980
Bandit Kingdoms map, by Darlene, from Dragon #63, 1982
Tarbean by rhysgriffiths
Sources:
2011A Dungeon Masters Guide, 1st Ed., 1979
9025 World of Greyhawk Folio, 1981
1015 World of Greyhawk Boxed Set, 1983
2023 Greyhawk Adventures, 1989
1064 From the Ashes Boxed Set, 1992
9577 The Adventure Begins, 1998
9578 Player’s Guide to Greyhawk, 1998
11743 Living Greyhawk Gazetteer, 2000
Dragon Magazine
OJ Oerth Journal, appearing on Greyhawk Online
Living Greyhawk Journal
Greychrondex, Steven B. Wilson
Greyhawkania, Jason Zavoda
Anna B. Meyer’s Greyhawk Map
at September 17, 2021